The humble curry has quite a remarkable capacity to dress up a vegetable, and as a result it is one of the most vegetarian and vegan-friendly food stuffs in the world.

Very few of us Brits can resist a Ruby Murray on a Friday night – but what if you choke at the idea of a chicken tikka masala, or barf at a beef massaman?

London has a lot to offer for dairy-free diners and meat-free eaters – from decadent daal to perfect paneer, these are the best vegan and vegetarian curries found in the capital.

Saag with tandoori paneer at Gunpowder

Gunpowder takes its veggie dishes pretty seriously. Here you’ll find nearly half the plates on the menu carrying that coveted “v” sign, with this paneer dish doing the curry department proud. Paneer – a type of cheese, for Indian veggie newbies – is cooked tandoori style and comes served on top of a creamy saag, a spiced spinach-stuffed curry. You can find it on the menu at both chef Nirmal Save’s original site in Spitalfields and at its new spot near Tower Bridge.

This Euston restaurant is so unassuming it’s actually in a basement – and not a particularly alluring one at that. It’s reputation for serving some of the best Malaysian food in the capital is, however, sky high. The star dish here is the roti canai, which comes totally meat-free. A warming bowl of curried dhall is served with two slices of the restaurants framed fluffy flaky roti – and the whole thing also comes in at a penny-saving £5. The same dish can also be found at Gopal’s Corner, Roti King’s Market Halls Victoria outpost, but it’ll cost you a whole £1.95 more.

For London’s vegetarians, Mildreds needs no introduction. This meat-free Soho institution has been catering for them since 1985 and here you’ll find a Sri Lankan sweet potato and green bean curry served with roasted lime cashews, pea basmati rice and coconut tomato sambal (a Sri Lankan spice paste). This dish is also totally vegan, and one of the most popular on the menu.

Scientists find that Curcumin, a compound found in the Indian spice Turmeric, prevents new ‘fear memories’ being stored in the brain

A spice commonly used in curry could help erase bad memories, according to a study.

Curcumin, a bright-yellow compound found in the root of the Indian spice turmeric, prevented new fear memories being stored in the brain, and also removed pre-existing fear memories, researchers found.

It is hoped that the findings will help develop treatments for people suffering with psychological disorders.

Psychologists from The City University of New York trained rats to become scared when they heard a particular sound. Scientists assumed the creatures were frightened when they froze.

Hours later, when the same sound was played to the rats, those who had been given ordinary food froze. Yet the rats fed the curcumin-rich diet didn’t freeze, suggesting their fearful memories had been erased.

Professor Glenn Schafe, who led the study, said: ‘This suggests that people suffering from post-traumatic stress disorder and other psychological disorders that are characterised by fearful memories may benefit substantially from a Curcumin-enriched diet.’

Memories are formed in the brain as new connections between neurons.

They are initially fragile, but gradually stabilise in the brain as they are put into long-term storage – a process known as consolidation. Read more…

A British doctor has become the first person to finish the world’s hottest curry at a UK restaurant – despite suffering hallucinations brought on by the dish.

Consultant radiologist Ian Rothwell, 55, took over an hour to eat ‘The Widower’ curry – which tops six million units on the Scoville Scale and is hotter than a drink of anti-riot tear gas.

The curry, which is filled with 20 Naga Infinity Chillis – the second hottest on the planet – is so dangerous to make it has to be prepared by chefs wearing goggles and a face mask. 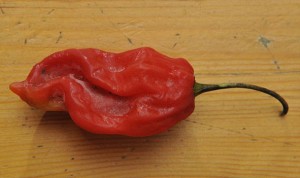 But Dr Rothwell became the first out of 300 people to successfully tackle the curry at the Bindi restaurant in Grantham, Lincolnshire, on Thursday evening – and said completing the challenge was harder than when he climbed Mount Kilimanjaro last year.

Despite walking out of the restaurant half-way through after suffering hallucinations, he returned a short time later when his wife found him wandering along the high street.

And fighting back tears for another hour, Dr Rothwell finally managed to swallow the last mouthful to defeat the dish.

‘I like hot curries and have at least one a week, but this was off the scale,’ he said. ‘It took me about an hour to eat it and I had to stop half way through and go out for a walk and some fresh air. My wife and the owner were quite worried and said I was hallucinating, but I managed to go back inside and finish the curry.’

Mr Rothwell decided to take up the challenge after his daughter Alice’s boyfriend told him his friends had failed to eat the hot curry.

It took him more than an hour to eat the curry dish, which he washed down with mouthfuls of cobra beer and a small amount of rice.

‘I trained as a doctor in Leeds and later as a radiologist in Manchester, so as a student I got used to eating curries as they were cheap,’ he said.

This curry got hotter and hotter as I went on and it was a struggle to finish, but I was determined to succeed.

‘The owner offered me a glass of milk to help with the hotness, but I decided to stick with beer and I think that helped.

‘I had to take a short break and go for a walk as I felt really sweaty and the owner said I was hallucinating, but I think it was just the endorphins from all the chillis.’

His daughter Alice, 23, said they all tried the curry but could only manage half a teaspoon.

‘I knew it was hot when dad admitted it was rather hot as he never does that,’ she said. ‘But he seemed to manage it without many problems. We were all clutching our stomachs after just half a teaspoon, it blew my head off.’

Muhammed Karim, managing director and executive chef at the restaurant said: ‘It took Mr Rothwell just over an hour to eat The Widower – but that included a 10 minute walk down Grantham High Street when he started hallucinating.

‘More than 300 people have tackled The Widower before – including about 10 women – but no one has ever been able to finish one.

‘Most manage about seven mouthfuls before they give up. We’ve had people sweating, crying, shaking and vomiting. We even had to ring an ambulance once.’

Mr Karim said Dr Rothwell, who is a regular curry eater from Sudbrooke, excelled at the culinary challenge.

He added: ‘Apart from spotting a few tears in his eyes, and the short period of hallucinating, he was cool and collected and seemed to cope very well.

‘I have tried The Widower and it really is a killer. Even making it is a painful experience – despite wearing goggles and a protective face mask. Dr Rothwell is a legend as far as I’m concerned.’